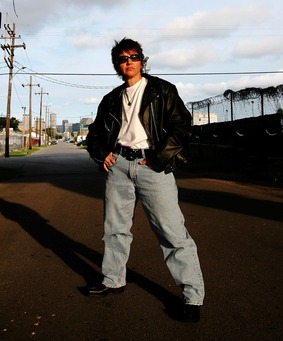 Beth Trepagnier is a native New Orleanian, who has been performing in New Orleans and the Gulf Coast area for many years. She has absorbed ALL the richness of New Orleans music. This can be heard in her written styles categorized as New Orleans Blues and Country Blues. She also loves other genres ranging from Rock, Hip-Hop, Country, Swamp Pop to R&B plus many more. She is a BMI affiliated songwriter and is the proud owner of Trepagnier Publishing! Her music is raw yet pure, it runs deep into her soul. She digs to the bottom of her being, to deliver a sound that's rough and raw, yet sweet! Beth's vocal ability is powerful and strong, trying to capture in a recording her raw live performance ability is virtually impossible, for this reason… you really SHOULD see her live! Her diversified knowledge of music has created the truly talented musician and songwriter that she is. Her accomplished instruments include... Drums, Guitar, Piano, and Vocals.


Beth was born and raised on the outskirts of one of most musical towns on the planet, New Orleans, Louisiana. Growing up with the love of music in her family, Beth was introduced to different styles of music early in her childhood. Some influences from those early years include but are not limited to: Otis Redding, Janis Joplin, Loretta Lynn, Hank Williams Sr., Al Green, Percy Sledge and many more. The Stax recording artists are still a big inspiration to her to this day.


Beth learned to play many different musical instruments at an early age, but the drums would be her instrument of choice. Later in life she moved on, to become an accomplished guitarist. At age fourteen she began studying guitar lessons through Frank Donaldson School Of Music then later became one of his instructors. Beth, Over the next twenty years, played with many different bands, including some of her own. Her musical journey took her to big and small clubs, festivals, lounges and roadhouses all around the United States and overseas. During this time, she developed her writing and performing skills, as well as developing her voice and own style of music. She produced her first 5 song CD demo, as well as playing almost every track on the disc. She has several studio hours working on album projects with band members and friends. Her music is currently airing in the United States on several radio stations as well as overseas. Her music can also be found on the World Wide Web on multiple streaming radio shows.